2020 has been a nightmare of a year. It’s made a complete mess of most people’s plans and dreams, especially those who love to travel. But like all bad things, it will eventually come to an end and there’s nothing wrong with planning in advance!

If you’re a travel geek like me and the prospect of spending more than a few months in one place sends shivers down your spine, you know how important a proper backpacker’s gear is.

A solid backpack is of course the bread and butter of any trip. Clothes suitable for the climate you’re heading to are equally important. But if you want to make sure that you’re tooled up to the maximum, you shouldn’t play down the importance of a proper timepiece which can be a life-saver in certain situations on the road.

Finding the best watch for backpackers can be a time-consuming process, especially if you’re not familiar with the essential features it should come with. To save up some time, below I have prepared a list of the 6 best models that won’t break the bank.

The list is divided into two sections. First, you will find my top 3 picks. If none of these caters to your taste, there are 3 alternative models further down the article. And finally, should the unthinkable happen and none of the 7 watches grabs your attention, at the very bottom of the page you will find a Buying Guide so you can find your perfect backpacking watch on your own.

As far as top watches for backpackers go, nothing beats Suunto when it comes to quality-price ratio. With the Suunto Core model, you get everything you could possibly ask from an adventure watch – and more.

The Finnish company has been on the market since 1936 but it wasn’t until the 21st century that it started dominating the outdoor watches market. Nowadays, Suunto timepieces are known for being rugged, feature-packed, and most importantly, affordable.

Suunto Core is the perfect companion for a backpacking trip for a variety of reasons. Let’s start with the basics, so the durability.

The watch comes with a tough, composite case measuring 49mm in diameter, with an aluminum bezel that can function as a compass. The band is made from elastomer, an equally-durable material that can take a lot of abuse. Protecting the watch face is a scratch-resistant mineral crystal glass. And finally, the water-resistance of this model is rated at 30m which makes the occasional splashes safe.

Moving on to the functions, Suunto Coore comes with aplenty. Apart from the afore-mentioned compass, altimeter and barometer are also included. Those are especially useful if your backpacking trips often include hiking and mountaineering. The watch also has a fairly effective weather indicator. Topping it all off is the Storm Alarm feature which senses sudden drops in air pressure and notifies you of approaching storms.

From the basic functions you might want to know about, the timepiece comes with different alarm settings, a calendar and a backlight. 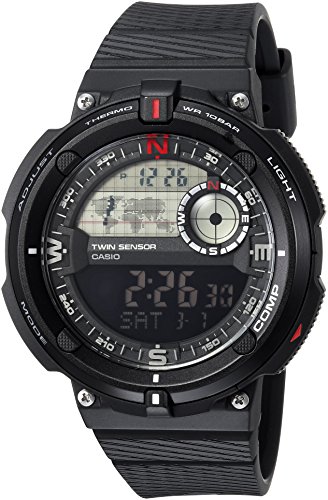 Suunto Core won’t break the bank and in my eyes provides the best value from all watches listed here. Nevertheless, if you want to shop at truly bargain-basement prices, it’s not all lost!

This Casio model here gives you some essentials features for a backpacking watch and comes at fraction of the cost.

Durability-wise, it’s just as tough as the Suunto model. The watch comes with an oversized 50,6mm resin case and band, as well as an aluminum bezel. Because of the case size, it’s probably better suited for people with larger wrists. Akin to the top pick, the dial window is made from mineral crystal glass. The watch holds an advantage in terms of water-resistance with a rating of 10BAR/100m –  making it suitable even for snorkeling.

The watch is run on a Japanese quartz movement, providing excellent accuracy typical for most Casio timepieces. It has the World Time function that features 31 time zones (48 cities + coordinate universal time).

One of the main features that any backpacker will surely appreciate is the digital compass with a graphic direction pointer. The model also comes with a thermometer.

From basic features that need pointing out, Casio SGW600H comes with an electro-luminescent backlight, daily alarms, and a calendar. 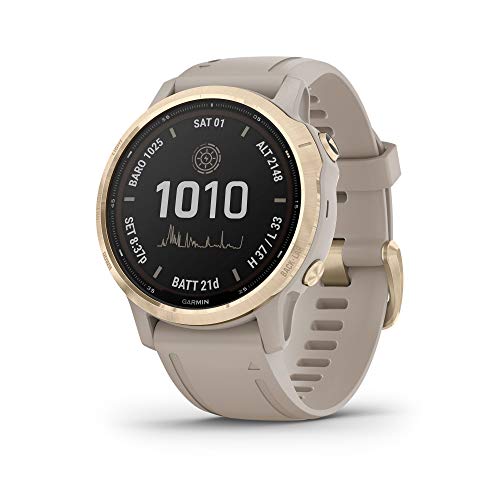 If stretching your dollar is not an issue and you are after a top-end model, full stop, make way for Garmin Fenix 6s. The watch is currently one of Garmin’s all-time best-sellers and it’s that for a reason.

The model is a smaller version of Garmin Fenix 6 and Garmin Fenix 6x and has been designed with slender wrist folk in mind. With a 42mm case diameter, it can surely look great on any wrist indeed.

The afore-mentioned case is made from highly durable polymer, whereas the bezel is stainless steel and the band material is silicone. When it comes to the dial window, Fenix 6s uses the so-called Power Glass, patented by Garmin itself. We can say that the scratch-resistance of this material is somewhere between a mineral and sapphire crystal glass – which is impressive. Add to that a 100m WR rating and we have a properly durable piece.

Like Suunto Core, Fenix 6s is a smartwatch. And by far, it’s the most feature-packed product on the list.

Being solar-powered, it’s also the most economical choice. On a single charge, it can remain performance-ready for weeks. To maximally speed up the process of solar charging, it’s best to avoid covering the watch face with your sleeve when outdoors. The brighter the sunlight, the faster the charge.

Not only is Garmin Fenix 6s the only solar product on the list, but it’s also the sole model that comes with a GPS feature. The model uses navigation data from three different satellites in form of GPS, GLONASS and Galileo, providing precise details of your whereabouts whatever the coordinates. The list of pre-loaded topographic maps is endless and even includes ski maps for over 2,000 ski resorts worldwide.

If you plan to stay in shape during your travels, the watch has a plethora of fitness apps that can help you do so. Those include trail running, swimming, running, hiking and more. There’s also an app exclusively dedicated to backpackers who love to surf which lets you record every wave you ride for later viewing.

To help you keep track of your everyday wellbeing, Garmin Fenix 6s includes the heartbeat tracking feature. Another one that will help you stay in good shape on your voyage is the Hydration Reminder.

As far as premium features are concerned, it’s impossible not to mention the support for Garmin Pay. Fenix 6s allows for contactless payments on your travels as long as you set up the app on your smartphone (either Android or iOS).

Last but not least, the watch naturally comes with all the basic functions such as alarms, stopwatches, calendars, etc.

A true powerhouse when it comes to watches suitable for backpacking trips – but it’s far from cheap. 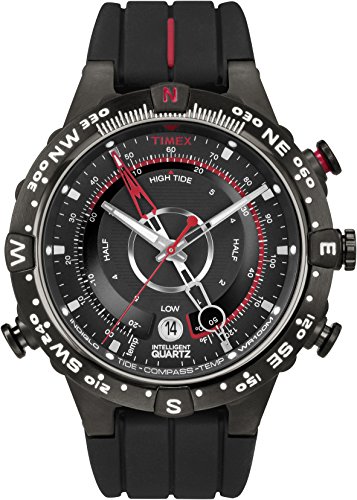 The first on the list of the alternative choices is this comment-worthy Timex model. The watch belongs to the Expedition collection, designed particularly with adventure seekers in mind.

Timex T2N720 is the first analog watch on the list and it’s run on a precise quartz movement. It comes with a 45mm case and bidirectional bezel functioning as a compass – both made from stainless steel. Its durability is further boosted with the presence of a mineral crystal dial and a 100m water-resistance rating.

Apart from the already-mentioned analog compass, this Expedition model also includes a tide tracker. The feature counts down to high or low tide and will be in particular appealing to backpackers who love to surf. A thermometer measuring air and water temperature is a welcome addition as well.

Like any other Timex timepiece, the watch uses Indiglo Light-Up luminescence technology, allowing for comfortable use in the dark. 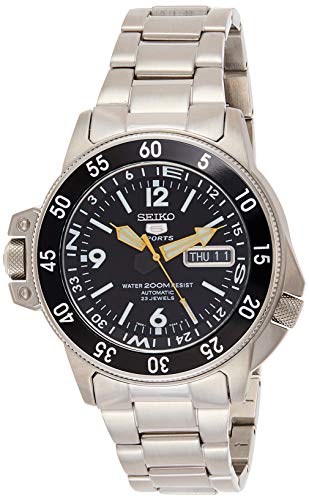 We’ve had our analog timepiece and it’s the time for the first and only automatic watch on the list. Although when it comes to going on an adventure I prefer models with quartz movements due to their unbeatable accuracy, I couldn’t help but include this elegant timepiece from Japanese brand Seiko.

Seiko SKZ211K1 belongs to one of the more affordable collections, Seiko 5. The whole line has been designed with sports enthusiasts and adventure-seekers in mind.

The watch uses a 23-jewel Japanese automatic movement. It isn’t battery-powered and is self-wound as long as you keep wearing it. To learn more about types of watch movements, click here.

On top of the movement type, what distinguishes this model from other products on the list is the fact that it’s all stainless steel. The case measures 42mm in diameter and includes a rotating bezel that functions as a compass. The watch face is protected by a Hardlex mineral crystal. The water-resistance is rated at an impressive 200m, making the watch safe to wear even during scuba diving.

Additionally, at 3 o’clock there’s a day and date calendar. Comfortable time-reading after dusk is ensured by 3 luminous hands and hour markers.

All in all, it’s probably the most stylish piece on the list and if you don’t mind missing out on a few seconds a day, it definitely gives further food for thought. 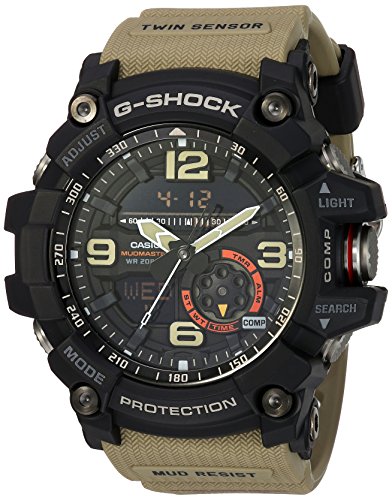 If you value durability above everything else, then there are not many, if any, more rugged watches than Casio G-Shocks. The model here is an absolute beast when it comes to the amount of abuse it can take during travels.

Like the majority of Casio timepieces, it’s run on a Japanese quartz movement, ensuring best-in-the-business precision and longevity. Unlike the previous all-digital Casio pick, this one has both analog and digital elements.

Characteristically for most G-Shocks models, the watch comes with an oversized case. Because of the 56,2mm diameter, it will probably look better on larger wrists. The case is made from resin whereas the band is silicone. Protecting the watch face is a mineral crystal window. Apart from an impressive 200m water-resistance, the watch is also mud-resistant and shockproof.

Similar to the previous Casio pick, the watch uses a digital compass. It’s also a Twin Sensor model, meaning it can serve as a thermometer and barometer. Other features you might find useful for your tips include daily alarms, auto-calendar and a backlight.

I truly hope that the list provided you with at least one model worthy of your attention. At the same time, I’m aware that one man’s meat can be another man’s poison and just because I loved all products on the list, doesn’t mean you share the enthusiasm.

That’s why I have prepared a short and easy-to-grasp Buying Guide that will help you find the best watch for backpackers on your own. Below you will find all the essential features you should look out for in such a watch, as well as some bonus perks that might make your voyage even more enjoyable.

A typical backpacking trip is rarely a walk in the park. When trying to pick a proper backpacker’s watch, we should prioritize durability above anything else. And that’s what I did when creating the list above.

Depending on your path and final destination, you might encounter different climate and weather conditions that might be borderline extreme at times. That’s why the watch should be able to withstand a lot and help you stay safe at the same time. When browsing for the right product on your own, make sure the following conditions are met:

If all of the essential durability conditions are met, you can look for some bonus features that could also go a long way in certain situations.

The ruggedness of a backpacking watch is so important. But so are some functions. Ensure that the below are included in the product you want to purchase:

Once all the essential watch functions are ticked off, you can look for some bonus perks, such as: