I don’t know a person under 40 that doesn’t own a smartphone. Do you?

In today’s technology-driven world, the so-called “younger” generation is, whether we like the sound of it or not, a prisoner to feature-jammed mobile phones.

And, with the growing rise of popularity of smartwatches, many of the activity is slowly but surely being transferred from mobiles to wrists. Whether you simply like to keep up with the Joneses or indeed love to get amazing insights into your health and fitness, smartwatches are the way to go.

Unfortunately, most require being connected to a compatible smartphone in order to let you use the majority of essential functions. Most doesn’t mean all, though.

If you’re a senior citizen or a relative of one, and you’ve been wondering whether it’s possible to find a fitness tracker that does not require a smartphone or computer connection, there’s some good news coming your way.

One of the most popular manufacturers of fitness trackers and smartwatches, Fitbit, has answered the call of folks who hate carrying their smartphones everywhere they go or simply don’t own one at all. In this article, you will find two excellent models of Fitbit for seniors without smartphones.

The mini-list is divided into two types of Fitbit: one is a smartwatch and the other is a smart band. Continue reading to learn about the differences between both. Should you decide to go with either, enjoy the phoneless ride!

Fitbit for Seniors Without Smartphone (Overview)

How Can Fitbit Work Without a Smartphone?

First things first. Before we move on to the review of two easy-to-use fitness trackers by Fitbit, let me shortly explain how the phoneless connection really works.

The #1 reason why 99% of smartwatches on the market require being connected to your mobile phone is the GPS. The Global Positioning System is a built-in feature that all modern smartwatches possess. However, the number of smartwatches with integrated GPS is still relatively small.

Why is GPS so important for the wearables, then?

It’s essential for all the move-related activities you perform while wearing a smartwatch. If you’re interested in getting insights into how far you’ve walked/ran/biked and at which pace you’ve accomplished your goal(s), a GPS connection is necessary – whether a built-in or absorbed from your smartphone.

The popularity of so-called standalone smartwatches is on the rise for myriad reasons.

Apart from the obvious physical comfort of not having to carry your mobile during every step you make, there’s also the appeal of beaming less electromagnetic frequencies at your body, 24/7. Remember that a smartwatch-smartphone collaboration requires a non-stop Bluetooth connection. However safe it’s portrayed to be, lack of it can do nothing but good for your cells.

Moreover, watches with built-in GPS, like the two included in the article, tend to provide much more precise data. That’s because they are reliant on their own system which synchronizes with the satellites in a more seamless way. The fact that these are constantly on your wrist and not tucked into a pocket or backpack definitely helps.

So, is there a Fitbit that doesn’t need a phone? Yes. Both of the models we will dive into right now come with built-in GPS that will allow you to enjoy most, if not all of its perks without a smartphone. 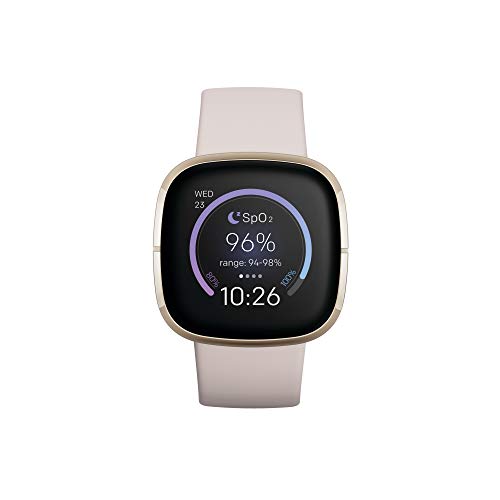 At the time of writing, Fitbit Sense is the brand’s most advanced smartwatch release. Apart from being totally fine functioning on its own, it comes with a plethora of health-tracking features that seniors will embrace.

Because Sense is Fitbit’s proudest release in terms of the number of features, it’s currently the brand’s most expensive smartwatch. Nevertheless, you can find it online at as low as $240. In case you find the price too steep, other Fitbit smartwatches with their own GPS are Fitbit Ionic and Fitbit Versa 3.

You might want to continue reading to learn why spending a hundred bucks or so more on the Sense model is still a great bit of business.

Starting from the obvious one, it does come with a built-in GPS that will provide as precise data as any other smartwatch currently available on the market.

One of its most standout features is the ECG app.

At present, Fitbit Sense is one of just three smartwatches with an FDA-approved ECG application (the other two are Apple Watch and Samsung Galaxy Active). With regular readings, the ECG feature can easily detect hearth-arrhythmias such as Atrial Fibrillation.

Another Sense’s app that carries an approval tag from the Food&Drug Administration is the EDA sensor. This feature is responsible for measuring the stress levels in your body.

Sense is also the only smartwatch on the market offering accurate skin temperature checks. The last premium health-tracking feature that definitely deserves a mention is the abnormal heart rate alerts. Whenever your heartbeat gets too low or too high, a notification will pop up on the screen.

As far as Fitbit products are concerned, the mentioned apps are exclusive to Sense. At the same time, they’re just the tip of the iceberg.

Other useful wellness features include:

Additionally, Fitbit Sense has an advantage over many other smartwatch brands in terms of battery longevity. Considering the long list of features it comes with, the 6-day battery life is really impressive. The model also deserves plaudits for its super-fast charging module that allows a full recharge in just 12 minutes.

Whilst many smartwatch brands offer different case dimensions to suit varying wrist sizes, Sense comes with a unified case. With a diameter of 40,5mm, it’s the perfect fit for both slender and large wrist types.

As far as bands are concerned, they are made from silicone and are available in two sizes – S (small) and L (large). The small band is for seniors with tiny wrists, with a maximum diameter of 180mm. The large band can fit wrists of up to 221mm.

Color-wise, the smartwatch is available in two versions – black and white.

The most damage-prone part of any watch, the dial window, is made from a highly durable Corning Gorilla Glass 3. It’s the most impact-resistant material currently used in the smartwatch industry.

Last but not least, Fitbit Sense is equipped with a 5ATM/50m water resistance. In practice, it makes the model a safe companion during short swimming sessions or while showering. 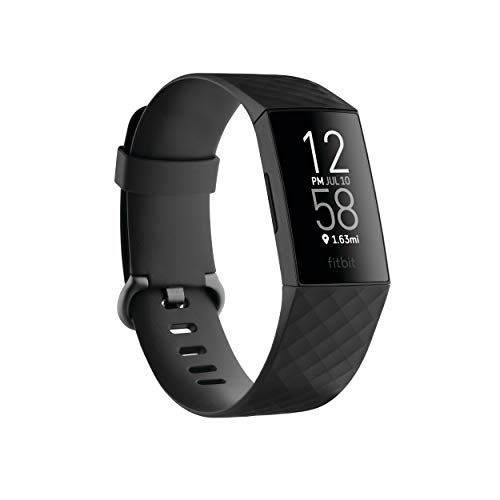 Smart bands are considerably cheaper than smartwatches but that doesn’t make them any less appealing. It’s all about what you expect from a wearable.

If you think that Fitbit Sense is…

…then switching your attention to a smart band makes total sense. The product we will discuss now, Fitbit Charge 4, is Fitbit’s sole fitness band that can perfectly function without a smartphone connection.

And since it can, by now you will know that it comes with a built-in Global Positioning System.

But what else is on offer?

As already mentioned, smart bands are not as feature-packed as smartwatches. Even though Fitbit Charge 4 is at the top end of the hierarchy in terms of the apps it offers, it’s not an exception to this rule.

To give you a better idea about the differences between the two products, maybe let’s begin with two important apps Fitbit Charge doesn’t include:

Everything else offered by Fitbit Sense that’s worthy of note is also available with Fitbit Charge 4. And the good news is, it’s likely to cost you around $100 less.

Charge 4 apps that any senior will find useful include:

Naturally, the band also includes a myriad of goal-based exercise modes for various activities that include swimming, jogging, and yoga.

Fitbit Charge 4 is a fitness tracker without a subscription necessary to use it. However, when purchasing the model on Amazon or Fitbit’s official website, you get a 90-day trial of the brand’s Premium plan.

Since smart bands aren’t as feature-rich as smartwatches, they don’t drain the battery as much. Hence, in the normal battery mode, Fitbit Charge 4 outlives Fitbit Sense by 1 day. However, with the built-in GPS mode activated, the band is likely to require a recharge after 5 hours.

Like with many other smart bands, at times you might even forget Fitbit Charge 4 is on your wrist. It’s a featherweight and inconspicuous device made for those who like to keep things simple.

In total, there are four variations of the watch available. Three in the Standard Edition (cheaper) – black, rosewood, and storm blue/black. Additionally, one in the Special Edition – black & granite reflective. The difference between the two is the woven polyester strap that’s included with the Special Edition model. All the features remain the same.

Akin to the Fitbit Sense model, Charge 4 comes in a unified size. The diameter is just 22.7mm, nearly half the dimensions of the Fitbit Sense. Durability-wise, it’s not any less enduring than Sense as it uses the exact same material in the form of Corning Gorilla Glass 3.

On the waterproofing front, Fitbit Charge 4 matches the rating of Fitbit Sense (50m).